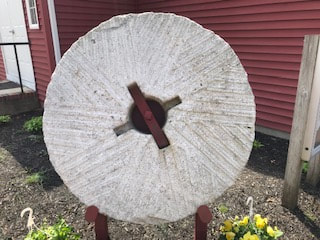 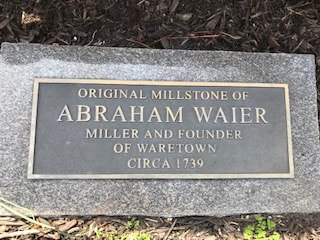 Meeting started promptly at 7:00pm with the following officers:  Adele, Ron, Bill, Joan and Linda (acting Secretary)
Joan reported for Bill that the shed had been power washed prior to the concert in September.  She also found out that next year it might be able to be washed by the town.
Treas. Report will have to wait.  Anne is out sick.
Adele stated that we are still waiting to hear back from WB Grant, but since the town has postponed the Ghost Ride again this year, then we will do the same and postpone our Cemetery Tour.
Diane A. asked if the town could borrow our plaque for the honor role program that they are planning for the new Veteran’s Hall.  Joan agreed.
Several people attended the meeting of Waretown’s Planning Board to discover that Master Craft has purchased the property behind their shop leading all the way to Main Street.  In keeping with the scheme on Main Street they have agreed to place a white fence at the end of the property and add trees to cover this fence as best as they can.  Many members of the planning committee were unaware of the history of Main Street to the town.
A suggestion was made that a program sponsored by us, could be done again.  Many years ago, a walking tour of the houses on Main Street had been planned and a look at doing something similar next spring might be a great idea to help explain the importance of Main Street.  We could also post this information on our website.
Prayers were made for Bill R.  A card will be sent.
This meeting was over at 7:26pm.

Meeting began with a Flag Salute and prayers for Bill R, Anne G.

Minutes were not available since we did not have a meeting in September but we did have Music in the Park. Please look at our Facebook page for pictures and videos.

Treasurer’s report – postponed due to an illness by the Treasurer

Memorial and Membership – Members are the same.  Memorials received in the name of Ruth R.

Correspondence – we received a note from Ernest M. thanking us for the kind note.  We also received donations from June M., Valerie R., Judy K., A sympathy card was sent to Michael W, son of Ray W who recently passed.

Scholarships that were distributed last year has one outstanding check.  Adele will
Look into this.

Pinelands Jamboree was a success.  Several items were sold.  People came and learned more about our Society.  Promoting the museum.  Norman Dupont’s niece, Kim C. came by and had a long chat with Ron.  It was good weather up until it was time to take apart and then it started to sprinkle.  A huge thanks go to June M., Jamie H. and Lydia D. for helping throughout the day.
$242.00 was collected at the Jamboree.

Music in the Park – Huge success.  Joan calculated approximately 250 people.  Ron T had placed 21 flags out in holders along the side lines which really added flare.  A big thank you to Bill F, Buck G and Will H for helping set up chairs, etc and taking it all down at the end.  A thank you letter was written and sent to the Ocean Township Committee thanking them for their help in making this such a great program.  Special thanks to the Dept. of Grounds and the Police Department for their excellent care of audience members parking, etc.  .      A note pad was passed around the audience for people to write down memories or thoughts about the concert, etc. This will be typed up and shared.  Cathy M sent Linda B two new pictures to post on the internet.

Program committee – Nothing right now.  Possibly in the Spring a re-visit of the houses on Main Street might be an idea.

Veteran’s Park is scheduled to open on Nov. 11th.  Not sure if this will happen.  Location is where the old Construction Dept building used to be.

Flag program – nothing new, except that Joan F said she received a message on the answering machine about a flag being found.  Also, a suggestion to update the poster inside the museum with local businesses that are participating.  Another suggestion was made to wait until 2022 when a full-on pledge program can start again with new members to be added to the list.

Acquisitions – a new spinning wheel was donated.  A thank you note was sent in appreciation.  Also, on the topic of spinning, if anyone has ideas on learning how to spin or knows anyone who can teach this, please let us know.  Sandy G. donated a doll that represents how a young lady might look in the 1800’s.  Very detailed. Artist/sculptor dated 2000.  Cathy M. donated a plaque about the cost of a Railroad ticket in the 1800’s.  Forms were filled out.

Memories of living in Waretown – a collection of memories from people who do live in Waretown or who have lived in Waretown is being started.  It would be made into a soft booklet type of format.  Free to members, but sold at local events.  We will be posting this information on the website and on Facebook asking for people’s stories.  Ken C. might be someone to talk to about events in Waretown.

The Library of Ocean County will be celebrating 40 years in 2022.  A program about the history of the library could be in 2022.


Ron T's part of the meeting concerned with Abraham Waier and the Grist Mill on Waretown Creek.

Abraham Waier was born in Oyster Bay, Long Island in 1683.  He married Abiah Culver in New London, Conn 1716.  The old town mill in New London was built in 1650.  Abraham would have seen the mill and it is thought that he built a similar mill here.
The New London Town Historical Society provided us with pictures of what the mill probably looked like when it was built in 1650.  They also sent us the history of the mill and a copy of the nomination to have the mill placed on the Register of Historic Places.  The owner of the mill was John Winthrop who would eventually become governor of Connecticut.  His family ran the mill for many years.  In 1781, a British Landing Party led by Benedict Arnold set fire to the mill but it was not destroyed.  This mill was situated with water from an elevated trough feeding water to the top of the water wheel.  Just a small amount of water was needed to turn the large wheel.
In our area, Abraham built our mill on flat land and the water was on the bottom allowing the wheel to be immersed in the water of the creek.

Why did Abraham leave Connecticut to come to our area?  Religious freedom seemed to be the strongest motivator.  There were Rogerine Baptists already in this area and a mill would need to be in an area where there were at least 300 families to make it worthwhile.  It is thought that the mill stones were brought here from New Hampshire and weighed between 1200 and 1500 lbs.  They may have been transported by horse and wagon which would have taken a very long time, or possibly by ship.  Tom Ackerman who was familiar with Grist Mills found one of our stones in the creek.  It is outside of the museum.  Two stones working together would grind the grain into flour.  The finished flour would be sifted into several grades, the finest being the most desirable and valuable.  No one wanted the coarsest flour and so we sold it to England.  Their climate was not good for growing grains, so they relied on us.  The second of our stones is thought to still be in the creek, but no one knows where.

The painting by Arthur Stevens is a depiction of what our mill may have looked like.  After giving him the information collected from New London and what we already had here in Waretown, Mr. Stevens was able to paint his idea of what the mill might have resembled.

John Y. started a search to find any living relatives of Abraham Waier and found over 1000 names of people who are somehow connected to the family. We are currently searching for anyone who might know of anyone related to this original family.  We are also curious if anyone knows where he lived in Waretown.
Anyone knowing anything can send an email to us at waretownhistoricalsocietynj@gmail.com or call us at 609-693-5666 and leave a message.

Refreshments were served after the meeting while guests chatted and met new members.