An appreciation of our past, Community in the present, and Preservation for the Future. 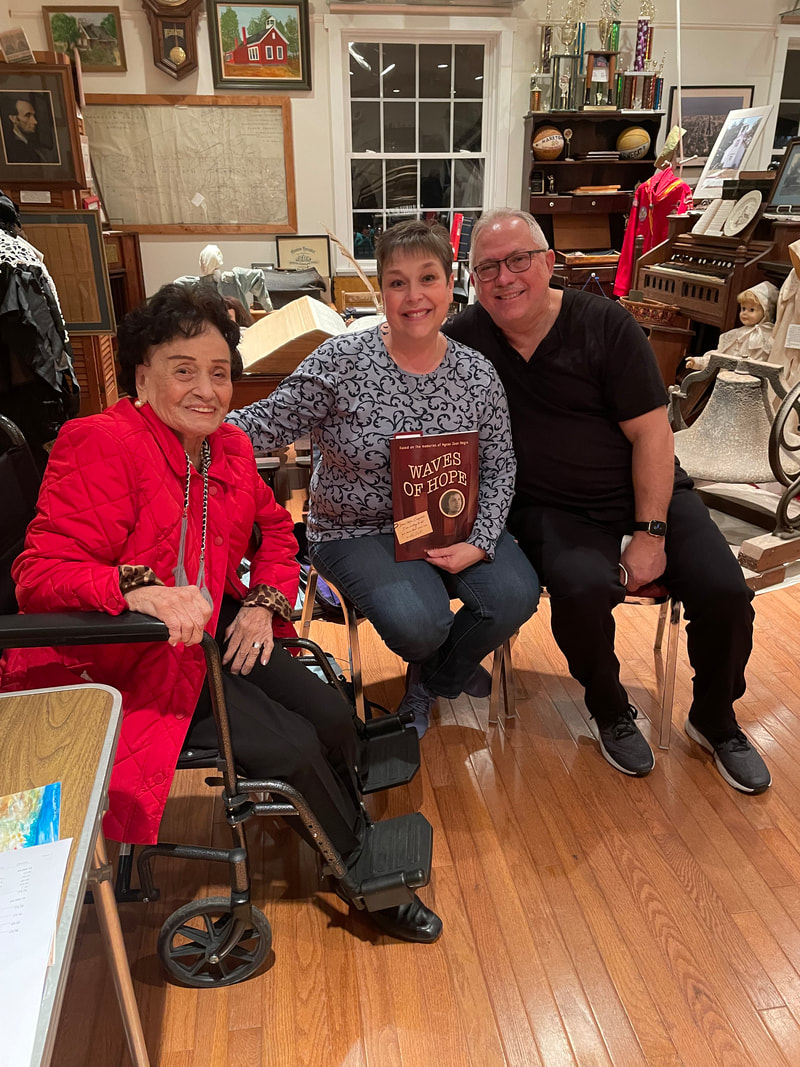 Minutes from the previous meeting are posted on the website and Bill made a motion to accept the minutes, Anne seconded.

Treas. Report – Formal report was unavailable, however the treasurer reported that she had collected flag money and the town donation money. All bills were paid.  Joan made a motion to accept the report and Ron seconded.
The insurance policy from WB Grant was given to Anne G. for safekeeping.

Linda reported that the town had trimmed the branches from the tree that were blocking the street lamp to see the sign for the park.

Membership – one new member John P. bringing our total up to 113 yearly members and 151 Lifetime members.  He has joined the Flag Program.

The two pictures sent us from Cathy M. are on the webpage.

Letter to members asking for memories is ready and Ron has copies to hand out at tonight’s meeting.  They will also be sent with membership information which is going out in December.

We are still looking for a new Secretary, Corresponding Secretary, Membership, Website committee and possibly Newsletter although many agreed that the newsletter information could be posted on the webpage.

Tonight’s meeting was posted on our Facebook page, our regular webpage and the town mass email.
Prayers were made for Bill R, Paul B and Richard E. Cards will be sent.

Joan made a motion to adjourn this part of the meeting, and Bill seconded. This meeting was over at 7:20pm.

Meeting began with a Flag Salute and prayers for Bill R, Paul B, Richard E.

Minutes were posted on the webpage and accepted during out executive meeting.

Treasurer’s report – read and accepted during our executive meeting.

Memorial and Membership – Members increased by one.

Correspondence – cards were sent to Bill R, Ruth R family and benefactors.  Valerie R was sent a thank you card and two shirts.
Scholarships that were distributed last year has one outstanding check.  Adele will
Look into this.

Flag program – one new member.   A suggestion was made to put the flags out on Dec. 7th.  Weather permitting?  No objections.

Acquisitions – None at the time.

Trustee report – None at this time.

Memories of living in Waretown –  A letter was handed out to all people in attendance and will be sent out with the membership information in December. We are looking to make a collection of memories from people who do live in Waretown or who have lived in Waretown is being started.  It would be made into a soft booklet type of format.  Free to members, but sold at local events.  We will be posting this information on the website and on Facebook asking for people’s stories.  Ken C might be someone to talk to about events in Waretown.

The Library of Ocean County will be celebrating 40 years in 2022.  A program about the history of the library could be in 2022.

Meeting adjouned 8:00pm Anne made a motion to close the meeting, Joan seconded.

Our guest speakers at tonight’s special meeting were Ron Negra and his mother Agnes Negra.  Ronald  Edward Negra, a Nutley, NJ native, was born on November 9, 1947. He enjoys writing about genealogy and wrote his first book in 2004 titled, “The History of the Verdi Family…Celebrating 100 Years in America.”  Ron also completed a book on the Negra Family History and on the life of his Father, August E. Negra.
Ron holds a Bachelor of Science Degree and a Masters Degree in Business Management and Marketing. He retired as an Executive after working in the medical industry.

Ron was inspired to write “Waves of Hope” by his mother Agnes Joan Negra, after learning of her extraordinary role in World War II communicating with the families of American soldiers, as they were captured and became Prisoners of War. His mother always believed it was important for Americans to understand the sacrifices of these men and the emotions they and their families experienced, of fear, anxiety, sadness, and hope.

Agnes, is so excited about this Book, which tells of her adventures during WWII, listening to her shortwave Radio from Nutley, NJ each day to Radio Berlin, to hear names of American POWs announced. She then wrote letters to their family to let them know their loved one was still ALIVE!
Many of the POW family letters and postcards written back to her are included in the book, and Agnes’ story is woven throughout the text.

Ron and his Mom have been recently interviewed and highlighted on CBS News, NY as well as News12NewJersey.

This program was outstanding.  Agnes came with a helper and she had just celebrated her 102nd birthday.  She shared some of her experiences from the time period leading up to Pearl Harbor.  She described the day Dec. 7th, 1941 and how most people were not aware of what was going on.  Eleanor Roosevelt interrupted the baseball game that was on the radio and announced what had occurred.  Franklin Roosevelt made his famous speech the next day, Dec. 8th.

Agnes explained how she had come to acquire the ham radio and how she learned how to use it and what to listen for.  She told us that the Germans would announce the names of prisoners every night and she would write down their names and where they were from.  Some of the letters she would send would not have a street address, but because mail people back then knew everyone on their routes most letters found their homes.

Agnes spoke to us in a way that made us feel like we were taking a trip in the past.  She was very clear with her memories.

Books were available that night and Ron signed them.  Book markers that were previously signed by Agnes were also included with the books.  It is highly recommended to anyone who was not at the meeting to purchase the book, Waves of Hope.  It is an excellent look at history.

Refreshments were served after the meeting while guests chatted and met new members. 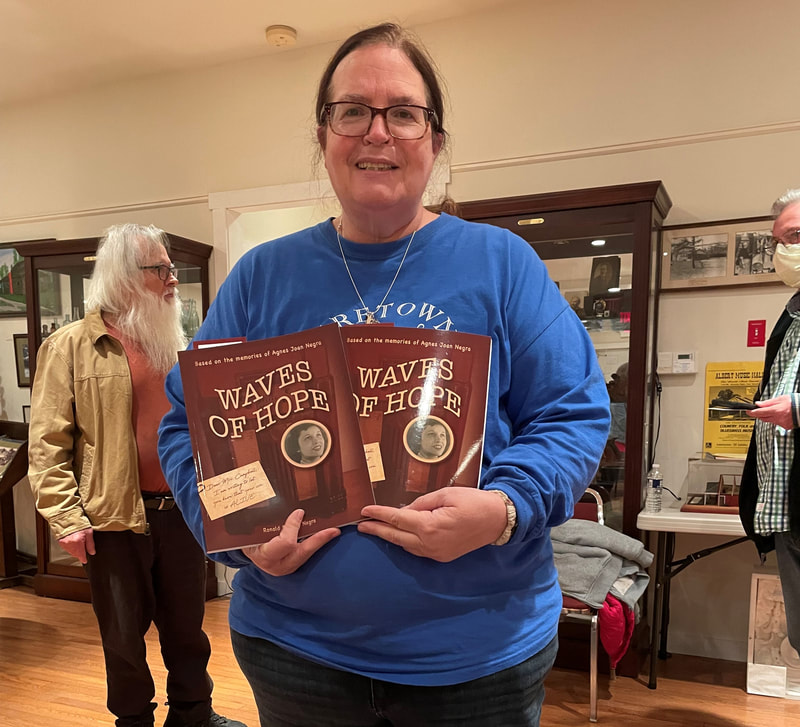 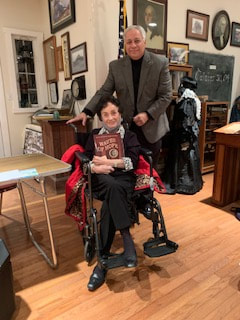 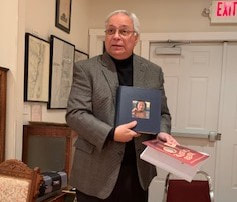 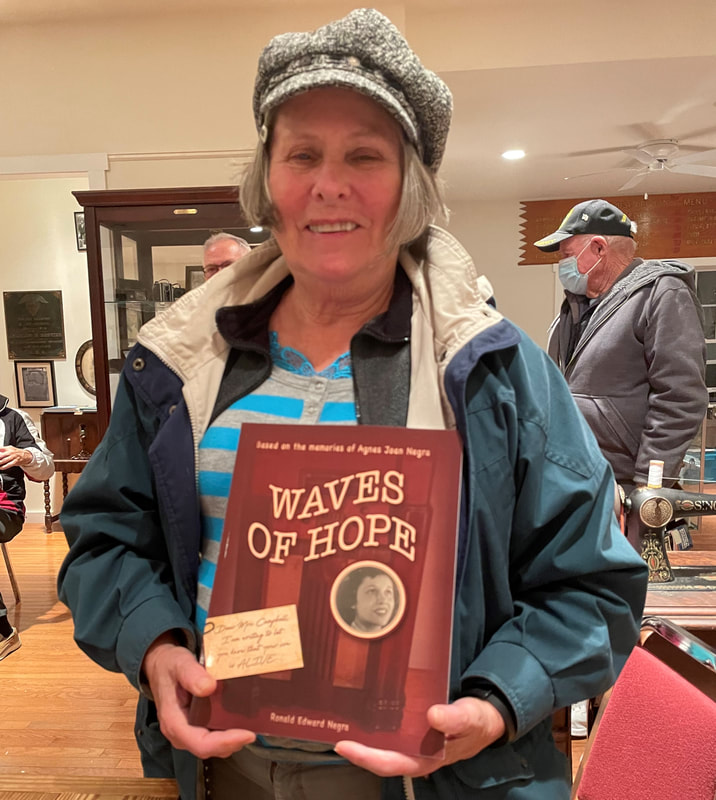 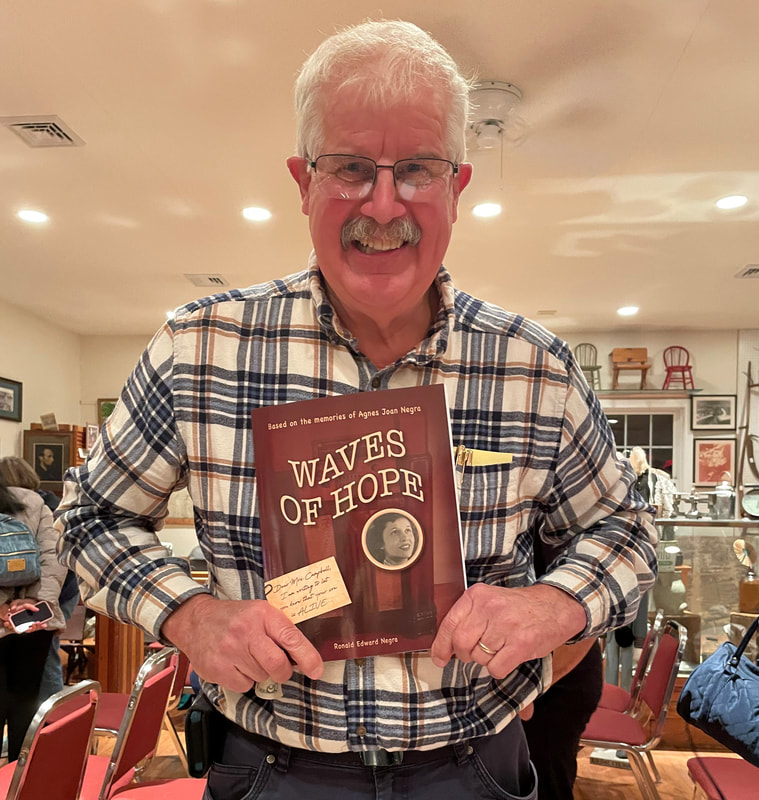 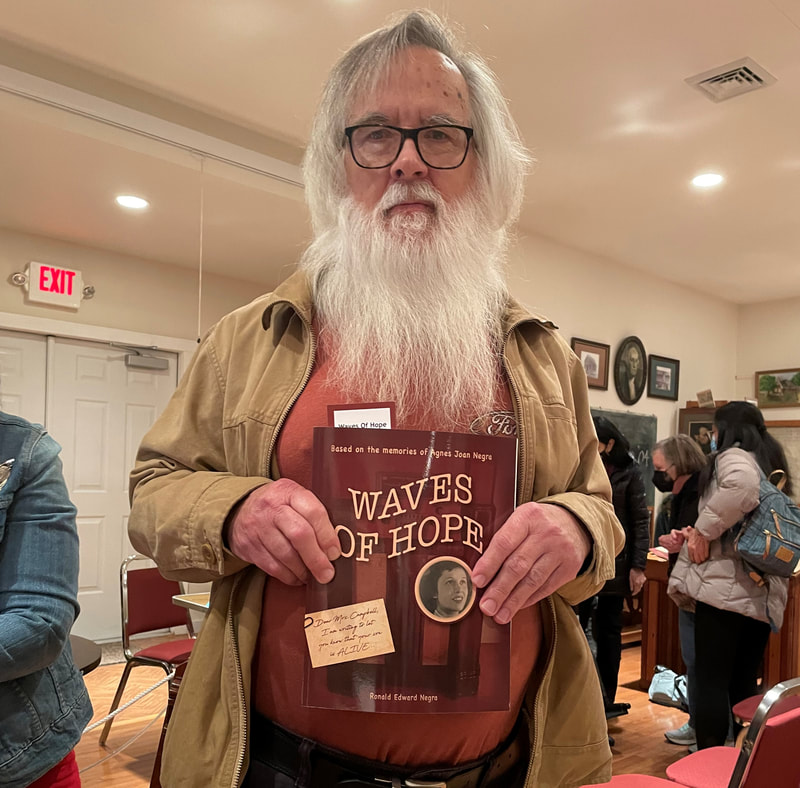 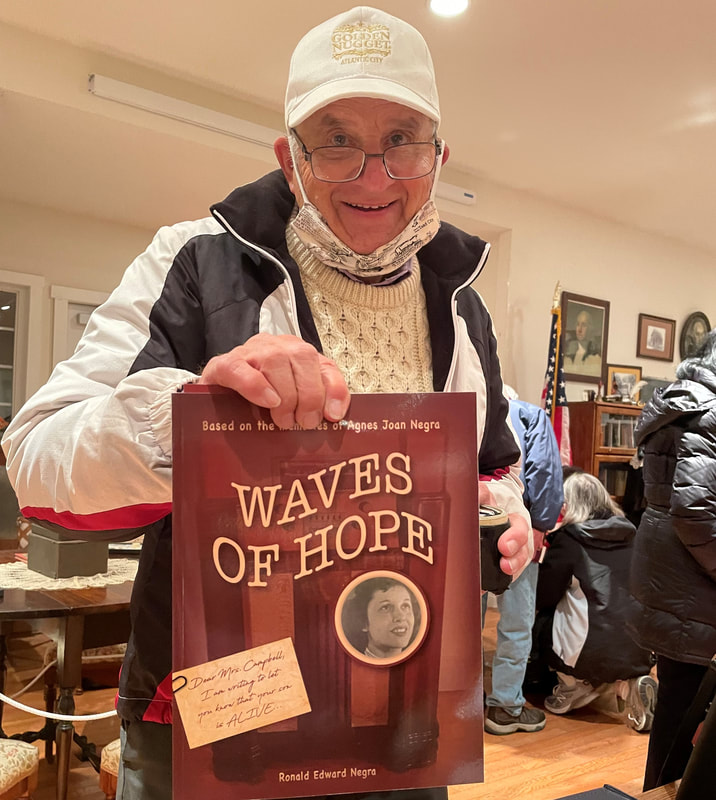 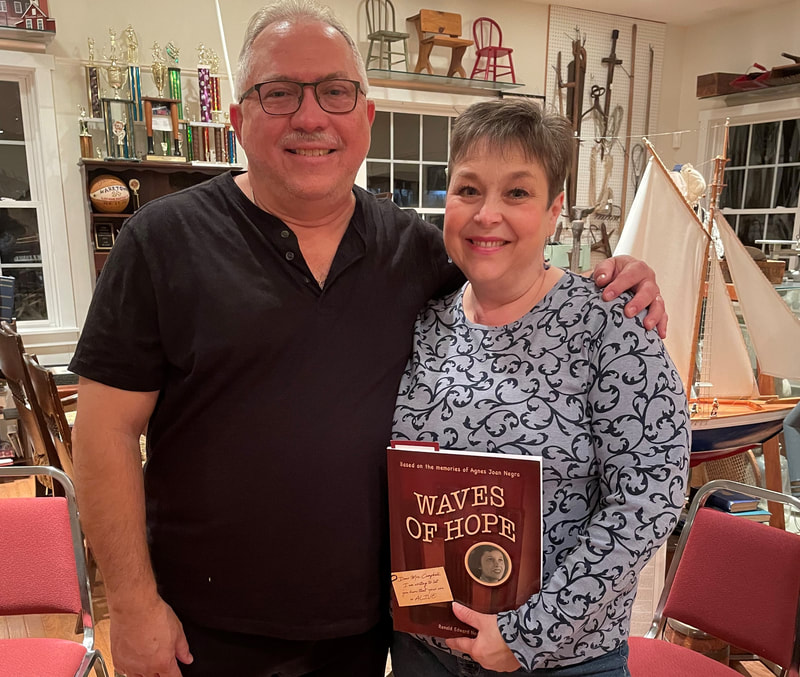 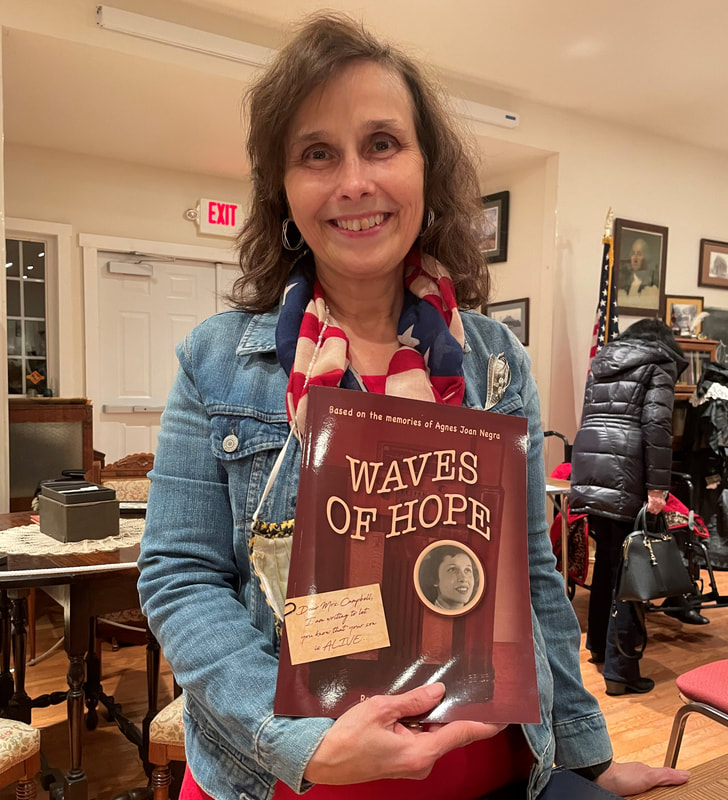