An appreciation of our past, Community in the present, and Preservation for the Future.
Before the meeting began, Adele S. asked about our previous patrons in prayers and then we added the family of Bob D. who passed in May, and prayers for Claire M who is now in hospice.

Minutes from the previous meeting are up on the website along with pictures and information about the mini program.  Adele asked if anyone had any corrections?  None.  So ordered.

The treasurer's report was sent in with Adele and given to Linda B.  She read part of it concerning the flag program.  A motion to accept this report was made by John Pu and seconded by Ron T.


We made a decision to be open for visitors in July and August every Friday afternoon, from 1-3pm.  We may have a program or two, or we will just be open to the public.  We can advertise this on the webpage, on Facebook and in an email blast from Adele and the township.  We also voted that if we found someone who would do a program, that the fee of no more than $150 would be allotted for each speaker.  John Pa. made the motion and Ron T seconded.
The Sheep to Shawl program will be put off until the fall when it will be a Sunday program with more people attending.

Old business-  Scholarships were handed out.  One female and one male who graduated from Waretown Schools.  $500 each.

8 Business have not yet donated .

Anticipated additional donations would be $460.00

IMO as 2022 letter “suggested donation” – still put them up.

After 4th of July I may approach those who haven’t paid – what do you think?
Doesn’t have to be decided now but how to handle in 2023?

Home flags:  This is a business partner fundraiser. We should stick to businesses.

New business - Flag program people who are delivering the flags should have shirts to identify them to others.  June made a motion to give shirts to each active flag member, Sandy seconded and all in favor said AYE.

Stickers for businesses to place in their windows saying "we support the Waretown Historical Society were discussed.  Ron T will ask how much they will cost at the new store on Rt. 9.

The July 4th program by the town will be this June 25th.  Adele usually reads the list of veterans who have passed.  Lydia will look into finding someone else to read.  If no one is available Linda B. will read the list. The museum will also be open.  Ron T., June M. and Linda B. will be there for visitors.

The Motion detector lights are not coming on.  This needs to be checked.

On Saturday, Ron T. went to the Quakers Meeting House in Barnegat and attended a program about cleaning stones in cemeteries including what kinds of chemicals are safe to use on the stones.  He also found out that the Barnegat group is dwindling in numbers and suggested that they come to Waretown and join forces.  Ron had a very nice chat with Ralph, from Barnegat, 95 years old.  The Quakers Meeting House is open every Sunday at 10:00am.

A reminder to continue writing stories about Waretown and also the Waretown Library and send them in was made by Adele S.

Not having any further matters to discuss, John Pu made a motion to adjourn and Ron T. seconded.

Adele S. presented new research on a newly acquired historical Bible that once was in Waretown Presbyterian Church and then moved to Forked River for many years.  It was just a chance of fate that has brought the Bible back to Waretown.  Adele explained about the religious background from New London, Connecticut to the Rogerines in Waretown and how various differences determined the changing of the churches.  An in depth report can be read at the museum next to this wonderful Bible.  Many of our founding fathers' families are listed under Births and Deaths.  It is truly an amazing Bible.  We hope you will all want to come see it. 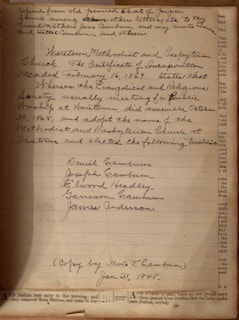 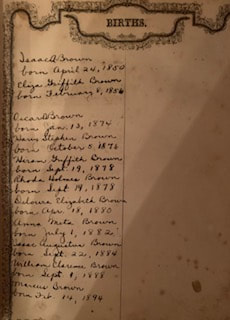 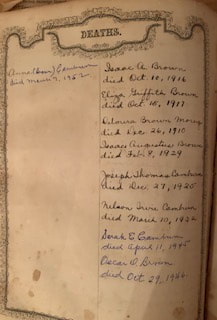 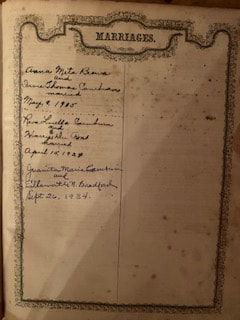 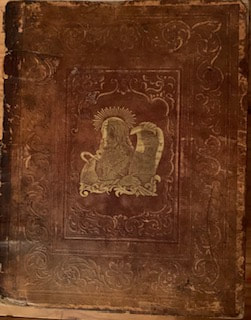 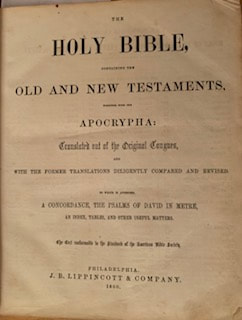